Why Hire a Local Drone Pilot to Create the Video for Your Wedding?

Wedding trends are a strange thing. Just a few years ago, flash mobs were the thing to do and now I think we can all agree they been done to death (reruns of The Office notwithstanding). You can’t go to a wedding today without hearing the song “Shout,” which was first released in 1959. Why some nuptial traditions stick around for generations while others burn out faster than a Kardashian wedding is a mystery for the ages; but with the average cost of a wedding over $30,000 in the US last year, getting in on a trend early means saving big money. Drone photography could very well be the next such trend – the numbers of drone wedding pictures getting posted online are skyrocketing with no indication of slowing down. But do you need to hire a drone aerial photography provider for your wedding?  Or should you lend your drone to someone or ask around to see if one of your friends has a drone (and quickly throw them off an invitation) in the hope they will inspired to use it for video and photographs of your wedding and reception? 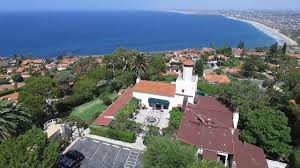 Why use a drone at all?

Because the entirety of the procession, the outside of the church or synagogue, the after event photos (including all of the wedding party), the dancing – including the entire crowd on the dance floor, the chance to do drone selfies (yes, that’s a thing) all make your wedding album unique.

But – and we can’t emphasize this enough – you really should hire a professional to do the flying rather than allowing your gadget-obsessed uncle who “can totally do it, no problem.”

Here are five reasons you should both budget for drone footage and hire a professional to do your wedding drone photography. 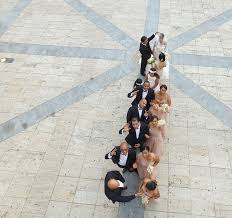 1.) Video is time consuming to shoot and requires skill. If you are still unclear why drone footage of a wedding is becoming more popular, just search for drone wedding on YouTube. As you are watching these awesome videos you will notice that some are better than others and none of the good ones are uninterrupted footage. The best videos consisted of planned out and edited shots. To get the best results, you are going to want to hire a professional photographer who understands both how to take a picture and how to maximize the drone’s capabilities to involve more of the wedding party and see it in a way that you can not otherwise. In addition, there are laws that cover what Drones can legally fly over and when that can occur. There is also licensing from the FAA called section 333 and Part 107 which Drone service providers are legally required to have. 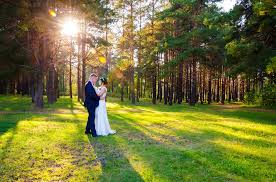 3.) You don’t want to do it yourself. Drone photography is an art and flying a drone is a definite skill – not as easy as it looks.  In addition, your venue may not allow a drone unless it is licensed and insured as a commercial drone pilot.  And taking great images with a drone requires focus and training. What do you think that chances are that the guest who owns a drone is going to do a good job in both flying their drone and shooting your wedding? My bet is that you will never speak to them again.

4.) Commercial Equipment Takes Better Pictures.  Most commercial photographers aren’t using cheap cameras or shooting with their iPhones – and in that same way, a $100 dollar recreational drone is not the same as the professional drone costing thousands of  dollars.  More expensive drones fly more steadily and generally have better cameras.

5.) You pay for editing. When you hire a wedding photographer these days, it’s pretty easy to find one who will do some post-shoot touch ups as part of the package. And thank goodness: because how many newlyweds want to spend the time and the effort adjusting lighting and fixing red eye on every picture taken at the wedding?

Even more intense would be combing through a couple hours of raw footage to cut together an effective and touching video. That’s why you should be sure to hire a drone photographer that has some skill and will do these edits for you. The professionals will not feel as bad about leaving your best friends current boyfriend’s selfie after 12 shots of Jagermeister on the editing floor (so to speak) or your new brother-in-law yelling “Who’s joining me in ‘bucaville?” Some things should not be archived for posterity.

Looking for someone who does wedding aerial photography in your area and want to learn more? Jobfordrones.com is one of the largest Drone service provider in the world and can help you to find a licensed operator and then get a competitive bid on your Drone aerial wedding photography.

We’re looking forward to seeing your wedding videos on a YouTube channel soon.

Amazing photos and great moments. I really appreciate the insight here in this post and many thanks for sharing it.